Corn from the orchard and a wine jar on top of the refrigerator in Nadejda Gorbachenko’s house. Guben Village. Chernobyl, Ukraine. December 2010.

The series Chernobyl: Still Life in the Zone, by Rena Effendi, an Azerbaijani photographer who grew up in the USSR, documents everyday lives of very few people still living in Chernobyl, Ukraine.

On 26th April 1986, the Chernobyl Nuclear Power Plant’s Reactor #4 blew up after a routine test. The resulting fire went on for 10 days, spewing 400 times as much radiation as the bomb dropped on Hiroshima. The surrounding area was declared uninhabitable by the USSR’s government and 116,000 local residents were resettled. In the following months over 1,000 locals decided to return to Chernobyl, regardless of the risk and official prohibition.

Almost 30 years after the Chernobyl disaster, access to the Alienation Zone is still restricted, with police checkpoints and barbed wire. In spite of this, about 200 people still live in the ghost villages and settlements inside the Zone. Now, mostly elderly women in their 70s and 80s and living alone, they cultivate the toxic wastelands of Chernobyl, growing vegetables, maintaining small orchards, breeding animals, and collecting mushrooms and berries in the radioactive forest. Their everyday lives seem ‘normal’, if it wasn’t for the fact that the soil, air, and water in the Zone are among the most heavily contaminated on earth.

Differently from at least a dozen of photographers documenting Chernobyl, Rena Effendi decided to seek out ‘life in the zone’ rather than produce an eerie memento mori. She documented the harsh and lonely lives of Chernobyl babushkas, creating empowering portraits and painterly still lives of simple, household objects. It’s one of those projects, where the visuals, narrative, and uncommon approach to the subject mean the images remain in your memory for longer (or at least should)…

Nadejda Tislenko (71 years). When this widow met up with the reporter and photographer she immediately called a neighbour, saying, ‘Hurry, quick, come over. There’s interesting people here, and they’re not missionaries!’

Knitting equipment of Galina Konyushok, a former liquidator of the Chernobyl nuclear accident, who is now living alone in her home in Zirka village. To keep herself busy, she occasionally knits making traditional folk patterns and religious images. Chernobyl, Ukraine. December 2010.

Matrena Olifer (72 years) lives alone in her house in Gornostaypol village. ‘Why should I be afraid of radiation? It does not bite!’ – she jokes. Chernobyl, Ukraine. December 2010. 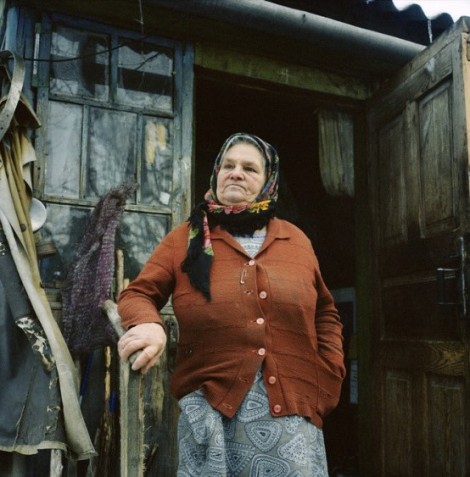 Maria Urupa (77 years) on the porch of her house in Parishev village. When the authorities came to evacuate the village after the accident, Maria decided to hide in the basement with her cows. ‘We didn’t care about radiation, it hunger that scared us the most’ – she said. Chernobyl, Ukraine. December 2010.

Falcon killed by Hanna Zavorotina (78 years) and hung up as trophy, after trying to hunt her chickens. Kapavati village. Chernobyl, Ukraine. December 2010. 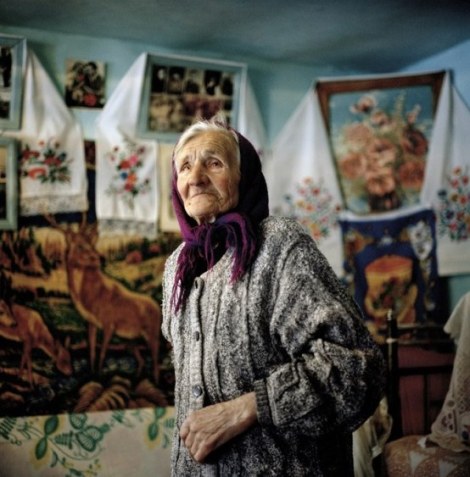 Maria Vitosh (86 years) at home in Guben village. ‘My years are my fortune!’ – she said. On April 26, 1986 Maria was planting potatoes in the fields when the accident happened. They continued working in the fields even after the word got around. Maria didn’t want to leave her home: ‘A pigeon flies close to his nest… Those who left are worse off now… all dying of sadness.’ Chernobyl, Ukraine. December 2010.

Galina Konyushok butchered a chicken to cook a broth. The food chain has been contaminated with radiation, especially animals that consume local food, such as grain and vegetation from the zone. Zirka village. Chernobyl, Ukraine. December 2010.

One of the ghost villages in Chernobyl, Ukraine. December 2010.